Procrastination is something that I and many others have struggled with, and it's one thing that Task Garden sets out to solve. 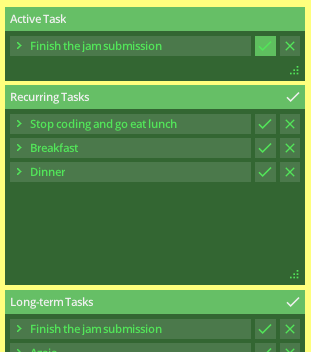 Procrastination is really a subset of the more general problem of prioritization: if you have a lot of things to do, you need to make sure you do certain things first, and oftentimes what we call procrastination is just prioritization of something that we think is less important or productive than the other task we're supposed to be doing.

A related problem with prioritization is that it's difficult to know what to prioritize when you have a lot of things to do. The more you have, the easier it is to neglect something productive you've been meaning to get to for a while, or to forget about an important event that's coming up.

This is why Task Garden's objective is to not just keep track of everything you have to do, but provide visual feedback to help you know what you might want to prioritize next. By sorting tasks into several categories, and providing top picks for each based on criteria such as when you need to have them done, what the last time was you last completed them, and how often you feel they need to be done, Task Garden makes sure that there's no task left behind. It strives to be the number one place to manage your Thyme.

Task garden is currently still a heavy WIP, and is not yet ready to be used. However, you can find and play around with the source code at https://gitlab.com/iamvoran/task-garden/ . Feel free to let me know how you would like to prioritize your own tasks, though keep in mind that feedback on the program itself might not really help until it's developed further.

I'd like to try it when there is a build available.