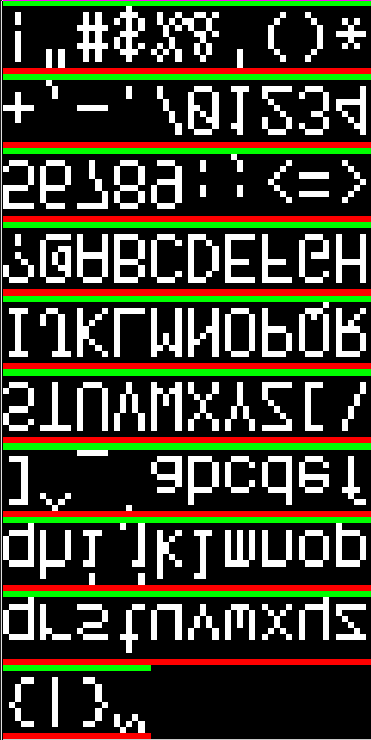 A short version could be (assuming I got it right):
When you ask the GPU to draw something, you define an area that isn't related to pixels/texels. The rasterizer will then determines if a frame buffer pixel needs to be drawn by checking if the frame buffer pixel center is inside the area. The idea is similar for texture, where you define the area of the texture you want to use.
keebler.elf
Brandon
3 posts
#22318
Pixel-exact texture mapping
2 years, 11 months ago
Ah, okay. It looks like the problem is the top-left pixel fill convention that at least the first link and Chris Hecker both talk about. When I use all (0.5,0.5) offsets and only draw to (width-1,height-1), I'm trying to exactly touch all the pixel centers. I can confirm now that what's being chopped off is indeed the very bottom row and the right-most column, but everything else is correct. Expanding the area out to integer values makes sure the pixel centers are completely included. Thanks!
Dawoodoz
181 posts / 1 project
#22815
Pixel-exact texture mapping
2 years, 8 months ago
Don't forget to test your implementation on many computers, because OpenGL driver developers may just go "Meh, this looks okay." without actually following the standard and leaving a random 0.5 pixel offset. Then your game breaks when moving to another computer. Maybe not on the second computer, but after 30 different models I can guarantee that your OpenGL game will be broken somewhere, no matter if you follow the standard or not. This even applies to OpenGL reference implementations, which are equally full of bugs.

OpenGL
I would use gl_FragCoord.xy combined with a 2D translation offset given as a uniform. Anything involving vertex data and samplers is too open for interpretation, which is why OpenCL doesn't use texture sampling at all. HLSL had a "load" instruction in shader model 4.0, which took whole pixel coordinates for deterministic pixel look-ups, but I don't remember if GLSL had that feature. Otherwise, the usual trick is to multiply whole pixel coordinates with the input texture's reciprocal dimensions as a uniform vector, then sample with normalized coordinates. Also stay away from integer types in GLSL, because these are less tested and may return random noise on certain graphics cards.

CPU
When making 2D on top of a 3D rendering pipeline, always ask yourself if you are using enough heavy 3D features to be worth using a 3D abstraction which might not work two years from now. A pure 2D game will probably be faster, lighter and easier to render correctly using intrinsic assembly on the CPU. OpenGL has precision issues from bugs leading them to define OpenCL instead, which is also full of bugs. Direct3D has the volatile memory wiping your textures at random times (device lost exception), so Microsoft had to avoid using their own API when doing interfaces that has to actually work.

Hybrid
Another option is to write a passively updated interface to a buffer on the CPU and upload it as a single texture without any gaps or seams, but possibly blurry on some computers. Anything that is passive will just take an extra millisecond on the CPU while the GPU is working in parallel.
← Back to index Log in to reply