Handmade Network»Forums
← Back to index
pythno
2 posts
#23583
Mesh Skinning
2 years, 3 months ago Edited by pythno on October 29, 2020, 7:53pm Reason: Initial post
I tried to implement mesh-skinning and got stuck in bone-space (or mesh-space, I'm not quite sure actually).
The model I use is built in blender. I export it as gltf and import that gltf into a custom tool that uses AssImp to
load the gltf data into my own format. AssImp is row-major but I use column-major matrices. I account for that
when converting the AssImp matrices into my own mat4-type.
My tool basically puts all the vertices/indices into an array, followed by
another array containing the bones' mOffsetMatrix. mOffsetMatrix is the matrix contained with each bone
that converts from mesh- to bonespace according to the doc: http://assimp.sourceforge.net/lib_html/structai_bone.html
Also, I export the skelton's node-hierarchy. AssImp stores this as a tree, so each Node contains a pointer-array
to its child-nodes, if it has any. For my own format I flatten this node-tree into an array (nothing against flattening curves,
by the way, but for this I think the array was more suitable). See the image below, how this looks in practice: 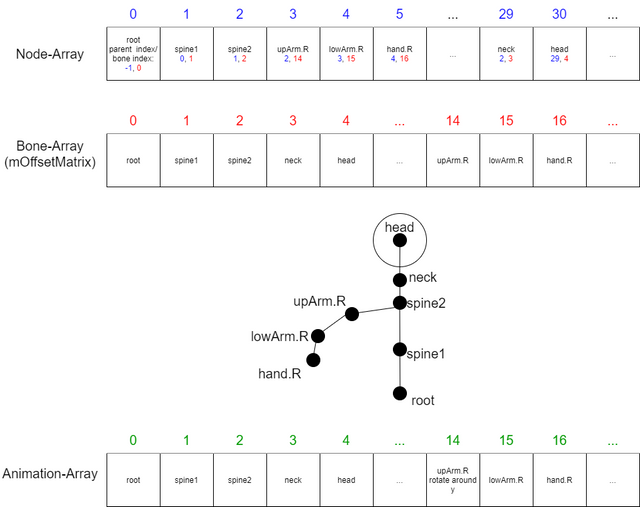 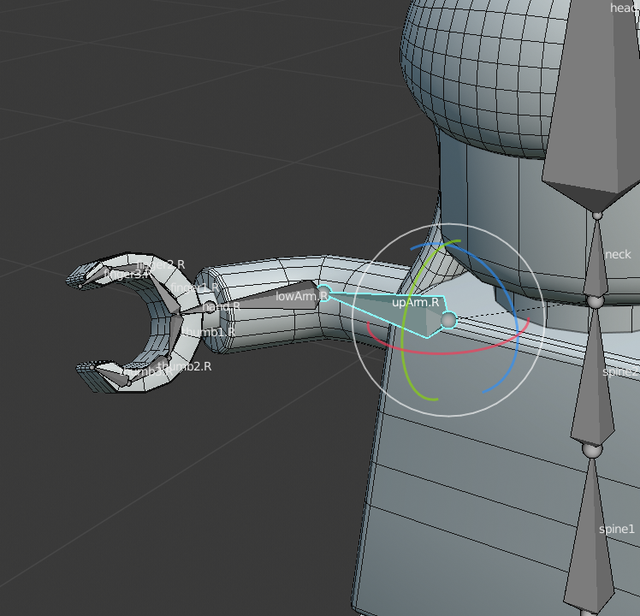 mrmixer
Simon Anciaux
1266 posts
#23591
Mesh Skinning
2 years, 2 months ago Edited by Simon Anciaux on October 31, 2020, 6:44pm
I don't have experience with that subject, but the first thing I would try (apart from taking a break and come back fresh to the problem) would be to verify your assumptions with simpler case.

Also this is about skeletal animation, not mesh skinning (at this point) unless the arm is part of the main model and is skinned to arm bones.
Dawoodoz
181 posts / 1 project
#23597
Mesh Skinning
2 years, 2 months ago Edited by Dawoodoz on November 1, 2020, 7:53pm
If hesitating about making it generic, you can organize the code as three separable steps to make the last parts simple and reusable.
* Assigning bone orientation using canned animation, physics or inverse kinematics. (in the game or a reusable humanoid system)
* Automatically enforce hierarchy on translation without affecting orientation. (helper function in library)
* Rendering of model based on bone-space to model-space transforms. (core engine)

I suspect that one of the bones have a bad transform which accumulates due to not separating the hierarchy logic from rendering, which makes it a bigger problem to tackle at once. Printing the determinant of each bone's final orientation should shed light on the scaling issues. It can also be a total bone weight exceeding 100% or unused bone indices having ill defined floating-point values in the skinning.
pythno
2 posts
#23660
Mesh Skinning
2 years, 2 months ago