Handmade Network»Forums»Work-in-Progress
← Back to index
1 2 Next
D3zmodos
19 posts
#8442
Veek - Slim live video chat
6 years, 4 months ago Edited by D3zmodos on January 13, 2018, 11:17am Reason: Update links & screenshot for new version.
Veek is my attempt at writing something like Skype/Google hangouts but which is slightly less infuriating to use and consumes a reasonable amount of memory in doing so.
I was inspired when I was watching one of Abner's interview streams. He was complaining about Hangouts being really broken and I thought to myself "I wonder how hard it would be to make something like that". Possibly famous last words...at the very least I now have a new appreciation for the "Works on my machine" joke. 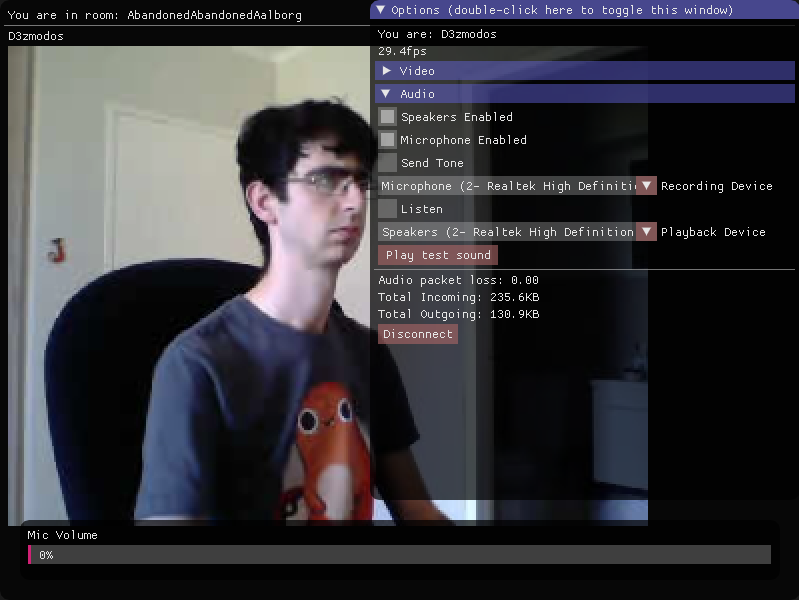 abnercoimbre
Abner Coimbre
321 posts
Founder
#8446
Veek - Slim live video chat
6 years, 4 months ago Edited by Abner Coimbre on September 6, 2016, 5:40am Reason: Minor grammar.
Interested in putting up your project with us? We still don't have an in-site mechanism for you to apply, but e-mail me at [email protected] so we can talk.
graeme
39 posts
#8461
Veek - Slim live video chat
6 years, 4 months ago
For the networking side of things look into WebRTC. I don't mean, hey, use webrtc. I mean, look into why it exists in the first place. There are some problems with video chat that can't really be resolved without some server somewhere doing some heavy lifting, but if you know what they are, you can recognise them and avoid trying to solve them in a simple p2p context. you'll still have a video chat program that works for most people
D3zmodos
19 posts
#13769
Veek - Slim live video chat
5 years, 1 month ago Edited by D3zmodos on December 16, 2017, 2:30pm
I know its been a long time but I have an update!

Let me know what the outcome is if you try it (I'd hope that it at least sort-of-works)!
abnercoimbre
Abner Coimbre
321 posts
Founder
#13772
Veek - Slim live video chat
5 years, 1 month ago
And contrary to last year, we now have a way to submit submit a project. Not saying you're interested in doing it still... but who knows what you're thinking!
D3zmodos
19 posts
#13777
Veek - Slim live video chat
5 years, 1 month ago
I feel like if I submit it as a project then I'll pressured to work on it more than I otherwise might (just by virtue of it being a listed project on the network).
While I'd like to think that I'll work on it every now and then, I posted the update because I've got something that mostly works (for me at least) and I want to go work on other projects.
It seems a bit weird to me to post a project and then put it on hold very soon afterwards? At least thats the reason I didn't submit it to be a project on the network originally, it had nothing to do with the submission system. :)
mrmixer
Simon Anciaux
1266 posts
#13783
Veek - Slim live video chat
5 years, 1 month ago
I tried it on my local network and it didn't work. I was able to create a room and join it from another machine, but no audio was coming through (I only tested audio) using the send tone checkbox.

When running the server and two clients on the same machine it works.
D3zmodos
19 posts
#13797
Veek - Slim live video chat
5 years, 1 month ago
@mrmixer Thanks for trying it out!
I've found the issue with the "Play test sound" button but I'm still investigating the high packet loss.

Does the MicVolume bar move at all when "Send Tone" is enabled? It should be around 3-4%.
Also for when it works two instances on a single machine, is that on the Windows 7 or 10 machine (or both)? I've had at least one other case where Windows 10 gave no sound input at all.
mrmixer
Simon Anciaux
1266 posts
#13801
Veek - Slim live video chat
5 years, 1 month ago
Yes, the mic volume was at 4% with "Send tone" (and without, my mic was detected correctly by Veek).

For the two client on the same machine it was on Windows 7.
D3zmodos
19 posts
#13915
Veek - Slim live video chat
5 years ago
After much tinkering, I've finally resolve at least a few issues that might've caused it to not correctly transmit any audio.
This version also features a slightly re-arranged UI that hopefully makes it a bit easier to find your way around.

I've used it myself to have a 20-minute conversation (across the actual internet, rather than just on my local network) so it definitely *can* work on machines other than my own and in realistic network conditions.
Let me know if it works for you. :)
Positron
Mert
2 posts
#13917
Veek - Slim live video chat
5 years ago
I want to start a project just like yours. However, i don't know how to start. Do you have any suggestion? How did you start designing and coding of your project?

When i open up some uml drawer,i just can create class "video_streaming" andddd i'm stuck :)
D3zmodos
19 posts
#13929
Veek - Slim live video chat
5 years ago
I think you're assuming that there was more designing than there actually was. :)
I probably started out with a minimal example of "I want to get audio input and output", hooked the two up to each other, added something resembling a UI to control it, and then added a layer of network IO to connect the two.
I certainly took the path of getting audio to work (nicely) first and then adding video later - and I'm *still* trying to make audio work nicely!

I did spend a bunch of time at one point trying to rearrange code so that it was a bit more "elegant" and intuitive, but I eventually gave up, realising that if there's a nicer design in there it'll probably become clear later on, and carried on with doing actual work.
mrmixer
Simon Anciaux
1266 posts
#13936
Veek - Slim live video chat
5 years ago Edited by Simon Anciaux on January 7, 2018, 2:37pm Reason: Linux binaries
Tried it. It's working on my local network and over the internet (after forwarding the port on my router).
No packet loss. Audio only.
On the local network, after disconnecting one of the client, a sound continue playing on that client (the other was playing the test tone). It resemble the test tone but was not exactly the same (lower volume, lower frequency).
Edit: Could you provide linux (debian) 32bit binaries ?
D3zmodos
19 posts
#13945
Veek - Slim live video chat
5 years ago Edited by D3zmodos on January 7, 2018, 9:05pm
Glad to hear it's working!

I'd like to set up TravisCI so that it saves the binaries somewhere at some point, but until then here are binaries that I built manually (on Ubuntu 16.04): 32-bit and 64-bit.
mrmixer
Simon Anciaux
1266 posts
#13955
Veek - Slim live video chat
5 years ago
Thanks.