As for terrain, I use a completely different representation. This time, I render the terrain from top down in orthographic view, then store away the depthmap into some texture I can easily use later. Therefore, querying terrain height at any arbitrary point becomes very fast.

Unlike last time, we don’t have the fortune to have a uniform representation for all collidables in our game world, so we have to write two separate solutions. However, it is widely more efficient compared to last time. Instead of feeding huge numbers of polygons into the collision system, I can approximate them with cheap convex shapes now. As for terrain, it just becomes four texture reads.

GJK is a powerful technique that queries the minimal distance between two convex objects, and it is also what I mainly use for my per-object collision system. I will only briefly summarize it here since there are already really good information on this topic, which I will link later.

Now, to check if A and B intersect, we can check if C contains the origin. This is the essence of GJK; we have reduced the problem to checking whether or not the origin is contained by some convex shape.

I know in Casey’s lecture on GJK, the termination condition is quite different. He simply checks if the extreme point in the search direction can get to the other side of the origin. That is enough for determining whether or not two objects collide, but it is not enough to find the minimal distance and the closest point on the simplex, which is vital to us, since we will need these information to resolve collision. Furthermore, some of the interesting optimizations I did will require GJK to reach the simplex that has the minimal distance in order to work.

Lastly, a word of warning. What I said above is purely in theory. There is more to termination condition in 3D GJK, such as clever ways of checking progression. I always find it reassuring to actually keep a minimal distance every iteration. Furthermore, you will also need to watch out for degenerate simplices, since most algorithms that determines a point’s voronoi regions will have unexpected behaviors if a simplex is degenerate, such as when a triangle becomes collinear and a tetrahedron becomes collinear in certain faces or coplanar. These are indications that GJK cannot make further progresses, because the new points is still within the current simplex.

In addition, a naive GJK implementation doesn’t work well with quadric shapes, such as spheres or ellipsoids, which are often shapes used to represent a player’s collision volume. In order for GJK to work for them, a tolerance value must be added to the progression check.

Accounting for movement in GJK

As I described. GJK is an algorithm for computing the minimal distance between two convex shapes. It cannot be directly used as a collision detection algorithm in games, since it doesn’t account for movement.

One simple trick in Ericson’s book can change that, though. Keep in mind that GJK only requires the geometry’s support function to work, it does not care about the explicit definition of that geometry. We can turn one of the object to be swept across space by its motion by changing the support function for that object. 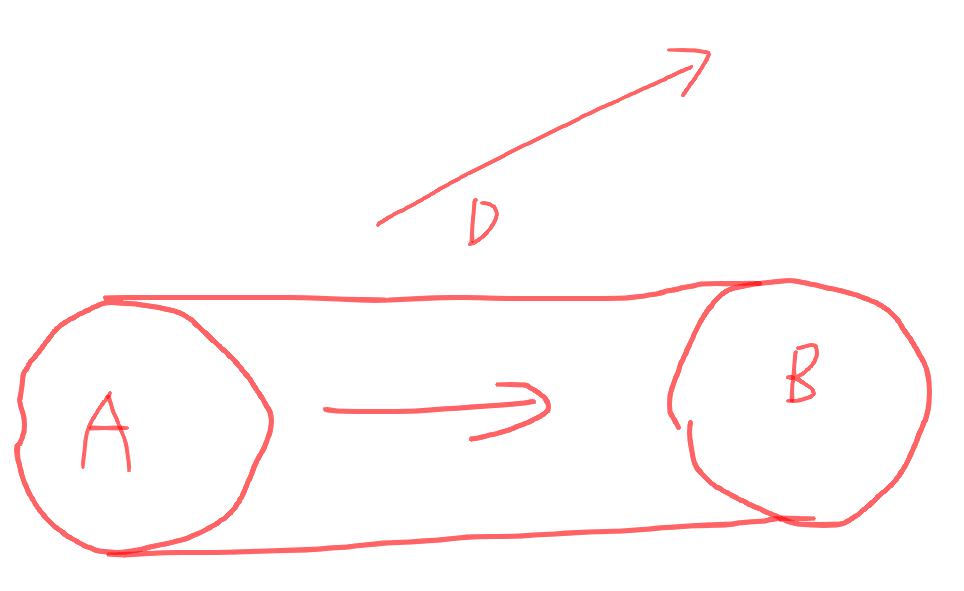 Consider the above swept sphere. The support function of the convex hull of the moving sphere will only return points from sphere B if the search direction is along the motion vector. In other words, we can simply do a dot product between the search direction and motion vector and use it to determine whether to use A’s support mapping or B’s support mapping. This effectively gives us a support function for a swept geometry.

In my game, I am using a capsule to approximate player’s collision volume and convex polyhedrons for other geometries in the world. There are two pieces of information that we need to handle collision correctly each frame. One is time-of-impact (TOI) and contact point. We use TOI to stop the player right before collision and use contact point to compute the normal plane, which is then used to reflect player’s motion in order to achieve “gliding”.

My use of capsule is intentional, as it simplifies things a lot.

To obtain time of impact, one GJK isn’t enough. It only tells me whether my moving capsule will collide with any object, but doesn’t say when it will collide with them. As recommended by Ericson in his book, bisection method can be used here to obtain a relatively accurate TOI. The concept of bisection method is simply halving the interval to ensure that the margin within the interval is where the possible TOI is. It is analogous to binary search. 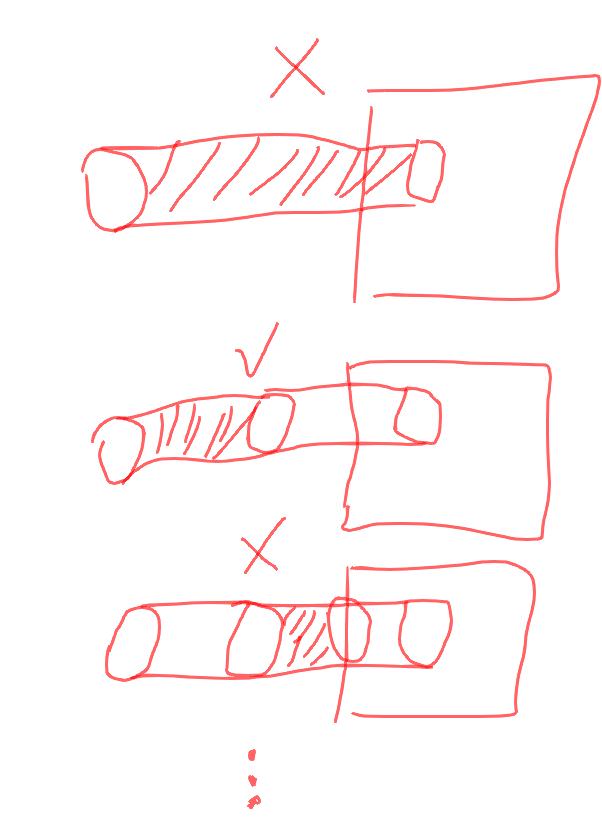 However, as I have stated before, quadric shapes don’t play well with GJK. We can simplify the problem a lot here by reducing the capsule into its inner line segment. This is inspired by Randy Gaul’s answer to my gamedev.net post. His suggestion is reduce the capsule to a line segment in order to compute contact point, but I realized it can also work in collision detection phase.

After determining TOI, we move the capsule forward by that amount, and we now determine the contact point between capsule and the closest object. As Randy Gaul suggested, the capsule is now reduced to line segment to find the contact point. That gives the advantage of only having to deal with non-quadric shapes and expect a non-tetrahedron simplex in the last iteration of GJK, since it’s impossible for the two to intersect when the radius of the capsule is non-zero, and our capsule’s radius is obviously non-zero.

But how do we compute closest point on either the capsule or the colliding object? Think back to the GJK algorithm. If the two objects are non-intersecting (which is obviously the case here), GJK is terminated by detecting a lack of progression (namely, comparing the minimal distance with the last iteration). Recall that we keep a closest point on the simplex to origin. This is not the closest point we need, though, as it is a point belong to the minkowski difference instead of the two original convex shapes. At the last terminating iteration, we convert the point into its barycentric form relative to the simplex. Because the current closest point on the simplex is a direct subtraction between A and B, we must be able to find two simplices on A and B that correspond to the end minkowski simplex as “source”, with the same dimension. 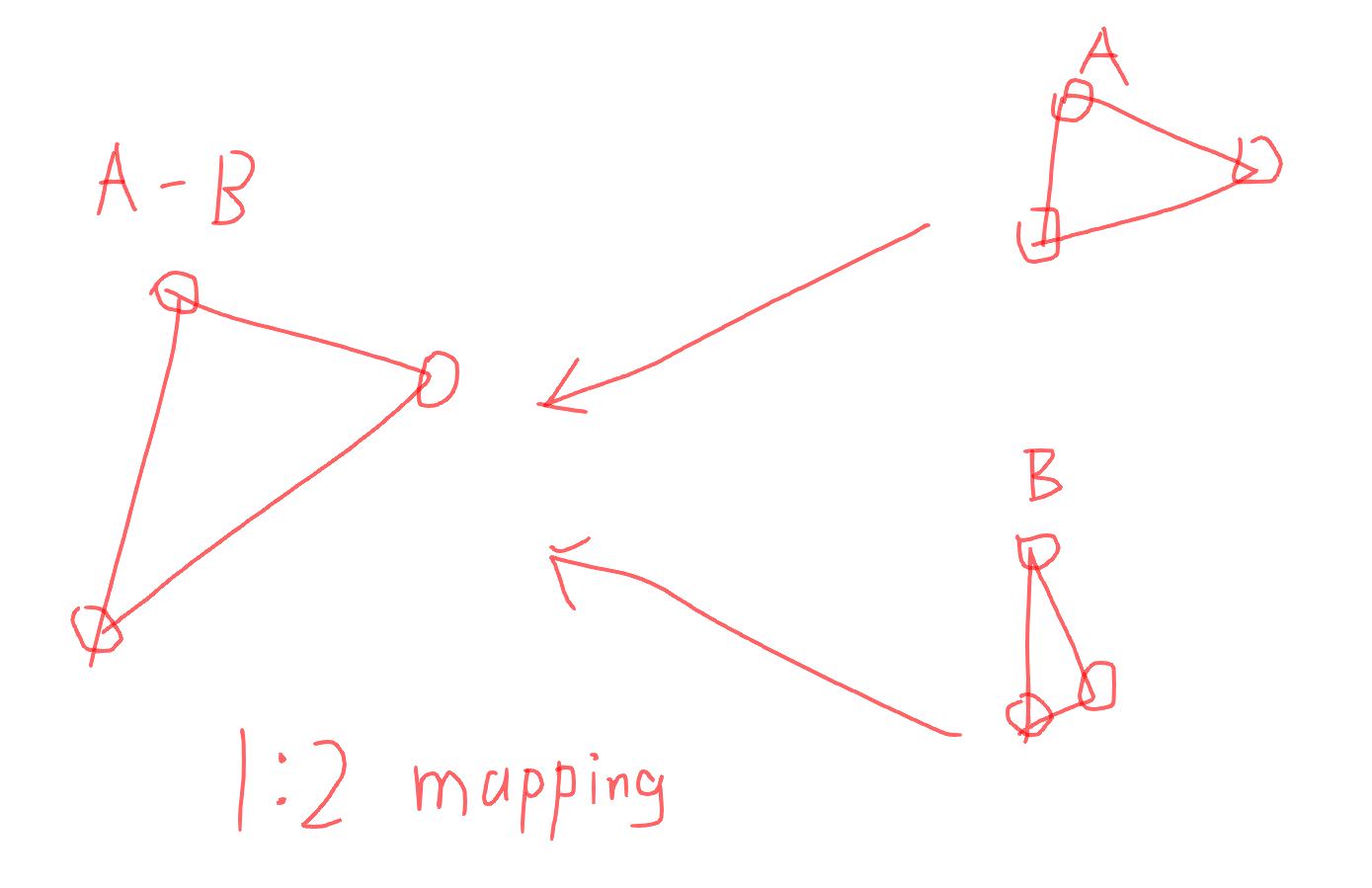 In order to find the corresponding simplex in A or B, we have to keep track of the source points when we construct the simplex in GJK. By retrieving these points and applying the barycentric coordinates to them, we can obtain the closest point on either A or B.

That is all for player vs object collision detection & response routine. I wanted to include terrain collision in this post as well, but it’s getting quite long, so I will save it for next time. And as always, a video of the working collision system. The pink spheres are debug drawings of the closest point computed by this algorithm: 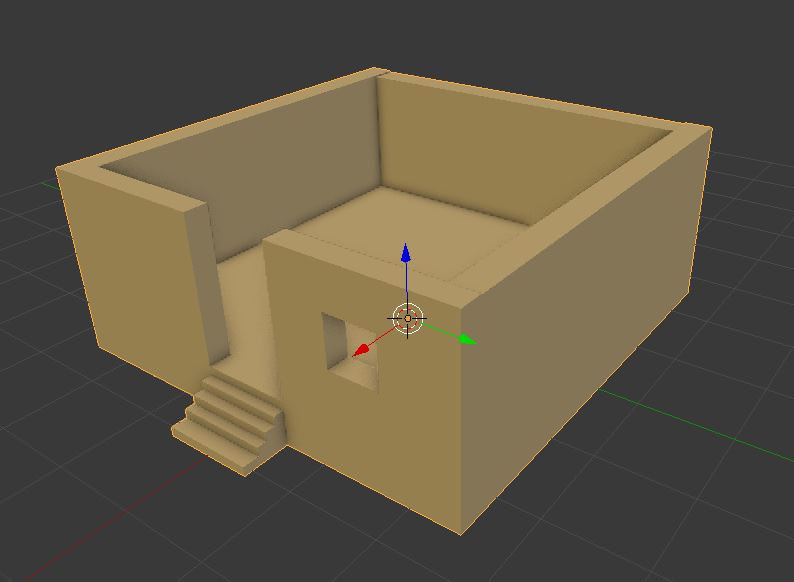 When I was blocking out the collision mesh for this model, I took the liberty to simplify the stairs. This is the model used for collision: 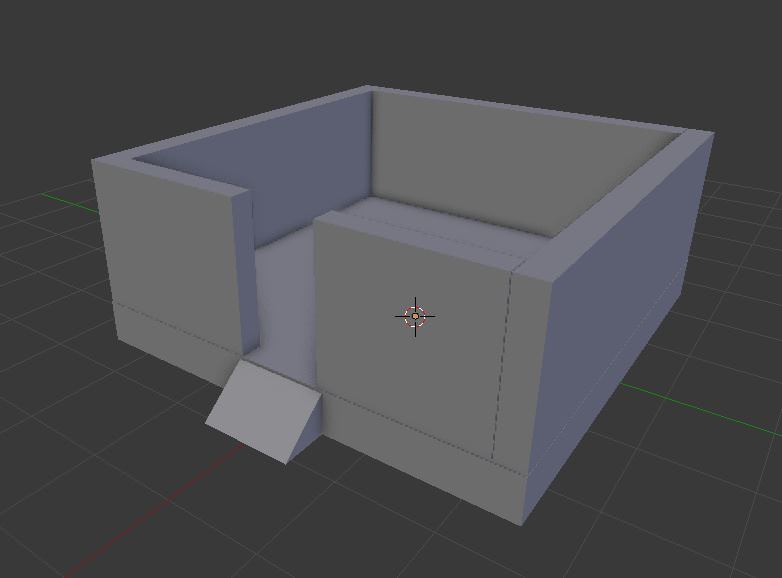 It would have been fine if I have preserved the details on the staircase, but in order to maintain convexity I must break down the stairs into multiple convex pieces. That would be certainly more costly to compute for the collision system (more instances of convex shapes + more vertices). This approximation is better both for smooth movement and faster computing (6 vertices if I only count the staircases' convex hull).
OliverMarsh
Oliver Marsh, 3 years, 10 months ago
Ah nice! I'll definitely be referring to this post when I make the foray into 3d.
Morskiyef
1 year, 9 months ago
Hi, Chen. Great post.
You talked a lot about collision detection, but I didn't understand very well how you do the response.
Are you using search in t like Case did for gliding along walls?
Chen96
Chen, 1 year, 9 months ago
Thanks Morskiyef.

My collision response routine is pretty typical. The detection system returns a TOI along a motion, I move the object up to that point, calculate the tangent plane of contact surface, and project the rest of the motion onto that tangent plane. Then feed it back to the detection system, get another TOI, process it the same way ... and so on. I do this iteration up to N times.
Morskiyef
1 year, 9 months ago
Thanks for your reply.

Oh, I got the picture. For some reason I thought you were doing something different.
Have you ever found a different approach for response? I feel like this is the best option, if you are not
going for a full physics were you have to process all contact points.