Handmade Network»Forums»Work-in-Progress
← Back to index
1 2 Next
ChronalDragon
Andrew Chronister
194 posts / 1 project
Developer, administrator, and style wrangler
#9354
(Eternal) Screenshot Saturday -- Post images/gifs/videos of your game or other project!
6 years, 2 months ago Edited by Andrew Chronister on November 13, 2016, 10:20am
Working on a game on the side and want to show off? Building a cool visualizer or analytical tool that produces pretty graphs? Made a sweet animation, landscape, or character art? Display them proudly here!

(It doesn't actually have to be Saturday when you post. Visual content is preferred, but if you can show off aural or textual content in an interesting way then that's cool too!)
SirIrk
Jeremy M
1 posts
#9361
(Eternal) Screenshot Saturday -- Post images/gifs/videos of your game or other project!
6 years, 2 months ago Edited by Jeremy M on November 14, 2016, 12:24am
Been working on a basic music visualizer for fun and learning. At the moment it just takes a few source images and breaks them up into particles which are driven by amplitude(using WASAPI). Rendering is in OpenGL. I plan on adding more in-depth sound analysis soon. 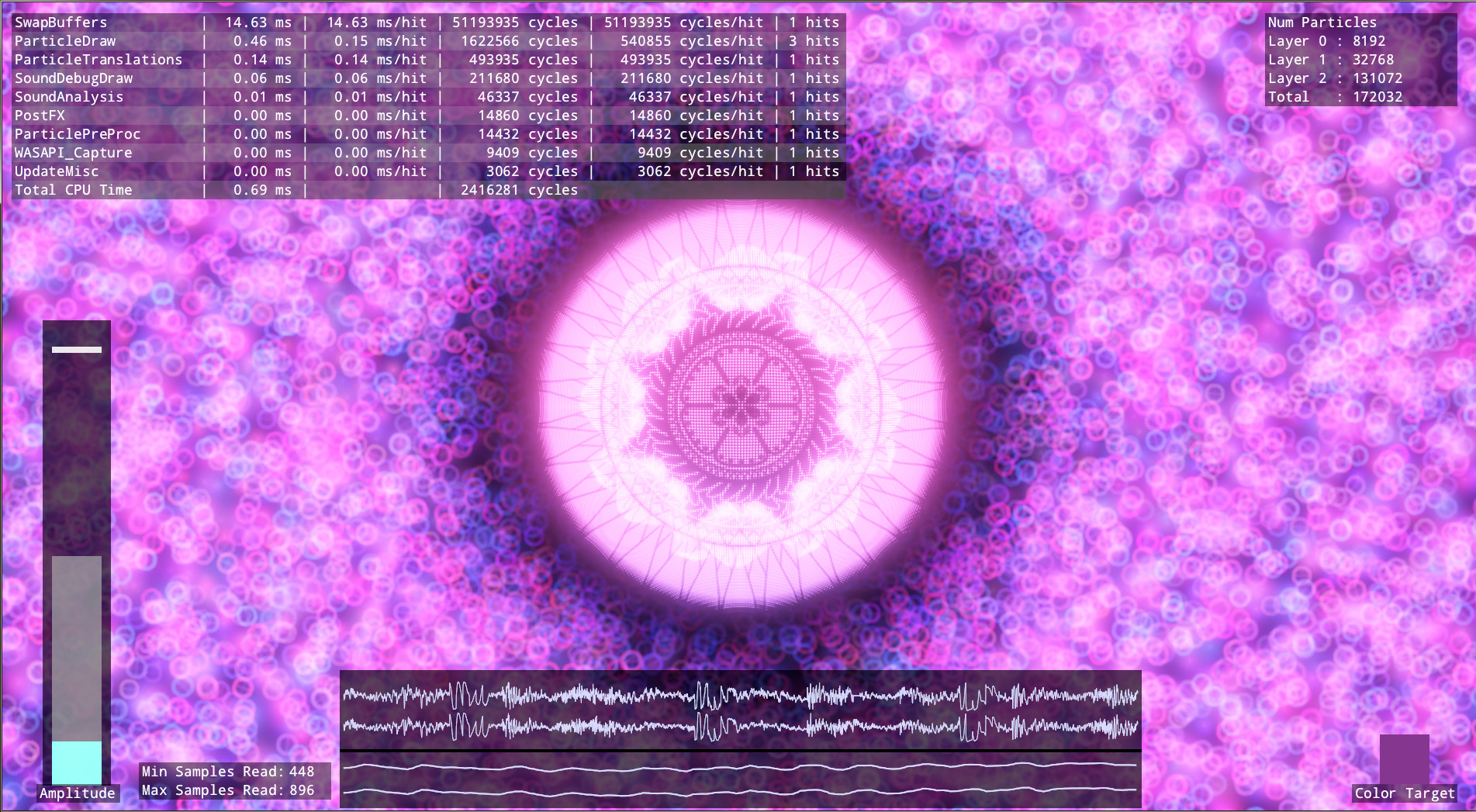 On a side note I'm excited about going to Handmade Con soon!
ryanfleury
Ryan Fleury
204 posts / 4 projects
Working at Epic Games Tools (RAD). Former Handmade Network lead, member of the Dion Systems team, maker of The Melodist and Telescope
#9365
(Eternal) Screenshot Saturday -- Post images/gifs/videos of your game or other project!
6 years, 2 months ago Edited by Ryan Fleury on November 14, 2016, 6:03am
gif link

d7samurai
70 posts
innovation through irritation™
#11320
(Eternal) Screenshot Saturday -- Post images/gifs/videos of your game or other project!
5 years, 10 months ago

It's more likely a new batch every frame. Then you can do per primitive culling by skipping primitives when building the batch.
d7samurai
70 posts
innovation through irritation™
#11323
(Eternal) Screenshot Saturday -- Post images/gifs/videos of your game or other project!
5 years, 10 months ago Edited by d7samurai on May 13, 2017, 3:01pm

everything is drawn in a single draw call, but the engine generates the track procedurally every frame, so each primitive can be individually tested on the cpu before being added to a common geometry buffer and uploaded to the gpu.
MandleBro
Jack Mott
110 posts
Web Developer by day, game hobbyist by night.
#11324
(Eternal) Screenshot Saturday -- Post images/gifs/videos of your game or other project!
5 years, 10 months ago
A couple of shots from an experimental procedural RPG I am working on using MonoGame: